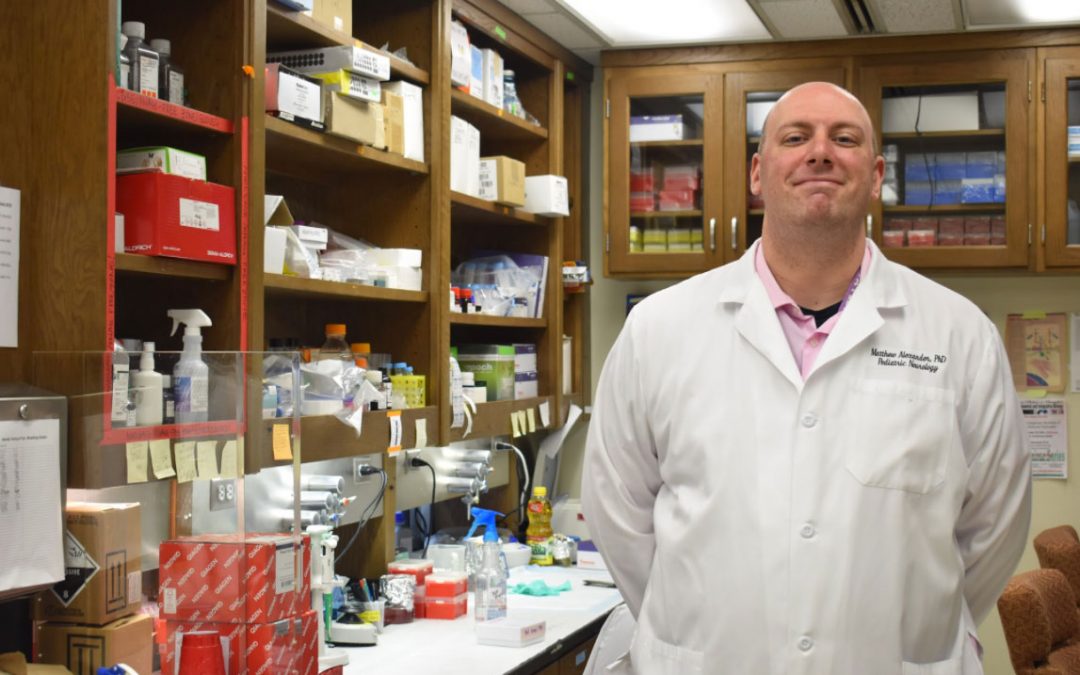 Visit any pet store and you’re likely to find them. Probably somewhere tucked in between your more exotic fish, like clown fish or maybe even hermit crabs, but they’re there. They’re small and unsuspecting. Most likely you’ll see them in large tanks and in large quantities. They’re zebrafish, and while they may not be the most glamorous or the most colorful fish available, they are by far the most fascinating.

Zebrafish are quickly becoming one of the most widely used animal models in research. As a matter of fact, zebrafish recently ranked as the number two most used model organism by the National Institutes or Health (NIH). You may be wondering how a creature that lives in the water, can barely grow beyond two inches in length, and is as ordinary as small fish could be the key to groundbreaking research. Well, we sat down with Dr. Matthew Alexander, Civitan scientist and President of the Research Civitan Club to discuss just that.

Dr. Matthew Alexander opened his lab at the Civitan International Research Center in 2016 and his focus is on exploring the roles of epigenetic modifiers of human neuromuscular diseases. Dr. Alexander’s lab is interested in questions about why some people with the same genetic mutation that causes a muscular dystrophy, especially within the same family, have vastly different symptoms. Dr. Alexander is using genetic and molecular biology techniques to identify these factors in hopes that they can be used as novel targets for drug development. Dr. Alexander uses his zebrafish models of muscular dystrophies to study muscle regulation, muscle function, and conduct large-scale screenings for possible drug therapies.

“I can screen about 1,000 compounds in a month with zebrafish versus mice, which the time and cost to do something like that [in mice] would take over years to do the same,” explains Dr. Alexander, “it’s much quicker and useful tool for us and is a fraction of the cost of traditionally screening mice. If we get a hit using a compound in our fish, then we evaluate it and take it up to mice.”

“It’s a devastating disorder, and my lab focuses on developing new therapies and new drugs using zebrafish as a model,” explains Dr. Alexander. “There are some really exciting things in clinical trials right now for different forms of muscular dystrophy. I am very hopeful that some of these treatments will be approved in the next few years and can really change the way to tackle these debilitating disorders.”

In addition to his work as a researcher at the CIRC, Dr. Alexander is also the president of the Research Civitan Club in Birmingham, Alabama. “I talked to Dr. Farah Lubin when I first arrived at UAB. She was the founding member of the club back in 2010,” Dr. Alexander recalls. “I’m doing a project [with muscular dystrophy] with a brain component. Some of these kids have autism, too, and we don’t quite know exactly why. We talked a little bit about our common interests and she mentioned her work with the Civitan.” After attending a few events held by the Research Civitan Club, Dr. Alexander joined as a member three years ago. Later he would become president-elect of the club, and now the president. From speaking to Dr. Alexander, it seems that there are several exciting developments in research beyond the muscular dystrophy field all thanks to these tiny, plain-looking creatures. Zebrafish just go to show that sometimes the extraordinary can be found within the most ordinary of places.